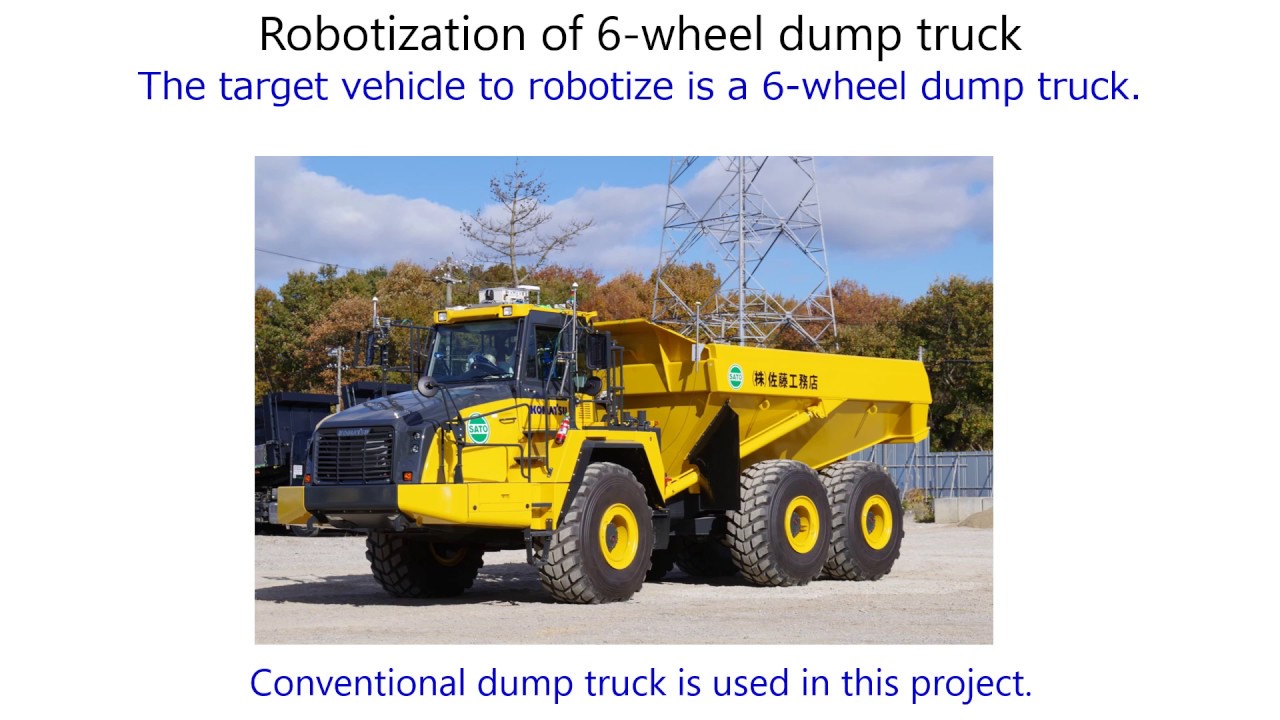 A robotization method by retrofitting a robot to conventional construction machines is introduced to lower the introduction barrier for regional construction companies. The target machine is a six-wheeled dump truck. A conventional Global Navigation Satellite System (GNSS)-based path tracking method was implemented on it. Also, to ensure safety during operation, an emergency stop function was installed on the dump truck with three-dimensional Light Detection and Ranging (3D LiDAR). Based on the initial experiments, the authors concluded that even the retrofitted conventional dump truck could perform basic functions for autonomous driving, such as path tracking and emergency stop. 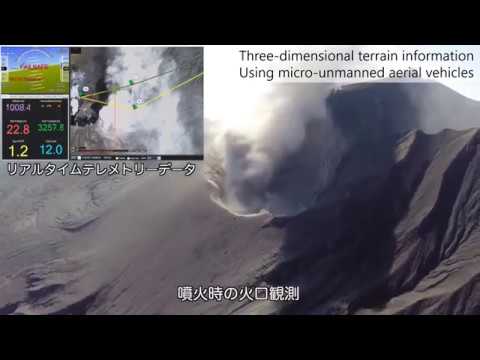 When a volcano erupts, molten rocks, ash, pyroclastic flow, and debris flow can cause disasters. Debris flow is responsible for enormous damage across large areas. This makes debris flow simulations a crucial means of determining whether to issue an evacuation warning for area residents. For safety purposes, restricted areas are designated around volcanos during eruptions, making it difficult to gather information (such as the amount and permeability of ash) required for precise debris flow simulations. An unmanned observation system, intended for use in such restricted areas, was developed to address this issue. The proposed system is based on a multirotor micro-unmanned aerial vehicle (MUAV) that transports cameras, small devices to measure target environments, and a small robot to active volcanic areas. Field experiments were conducted at Mt. Asama and Mt. Unzen-Fugen to validate the function of the system. Data obtained by these systems can contribute to the improvement of debris flow simulations developed in the project. 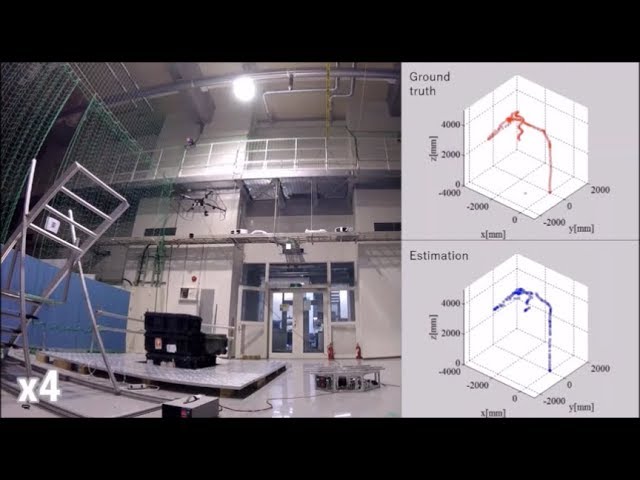 At disaster sites, the use of Micro Unmanned Aerial Vehicles (MUAVs) is expected for human safety. One application is to support first-phase emergency restoration work conducted by teleoperated construction machines. Recently, to extend the operation time of a MUAV, we proposed a power-feeding tethered MUAV to provide an overhead view of the site to operators. For autonomous flight of the MUAV, we propose a position estimation method by observing the slacked tether instead of using the Global Positioning System (GPS), vision sensors, or a laser rangefinder. The tether shape is assumed to be a catenary curve that can be estimated by measuring the tether's length, tension, and outlet direction. Some indoor experimental results proved the feasibility of the proposed method, as shown in this movie clip. 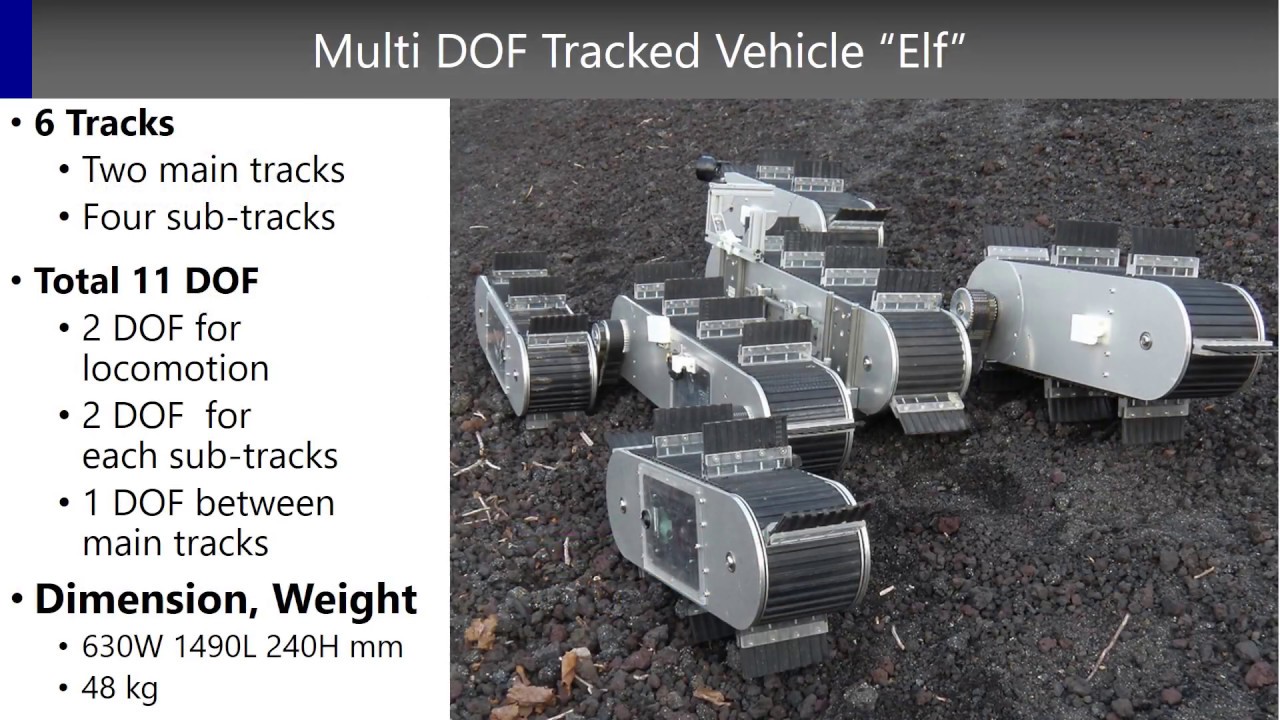 In response to active volcano observation, our research group developed a novel multi-D.O.F. tracked vehicle, called ELF. The robot essentially consists of six tracks, and it has eleven actuators for locomotion and change of configuration. These actuators enable the robot to assume various configurations, which increase its ability to traverse weak and rough terrains in volcanic areas. In this movie-clip, the mechanism of Elf and its initial test in a volcanic field are introduced. 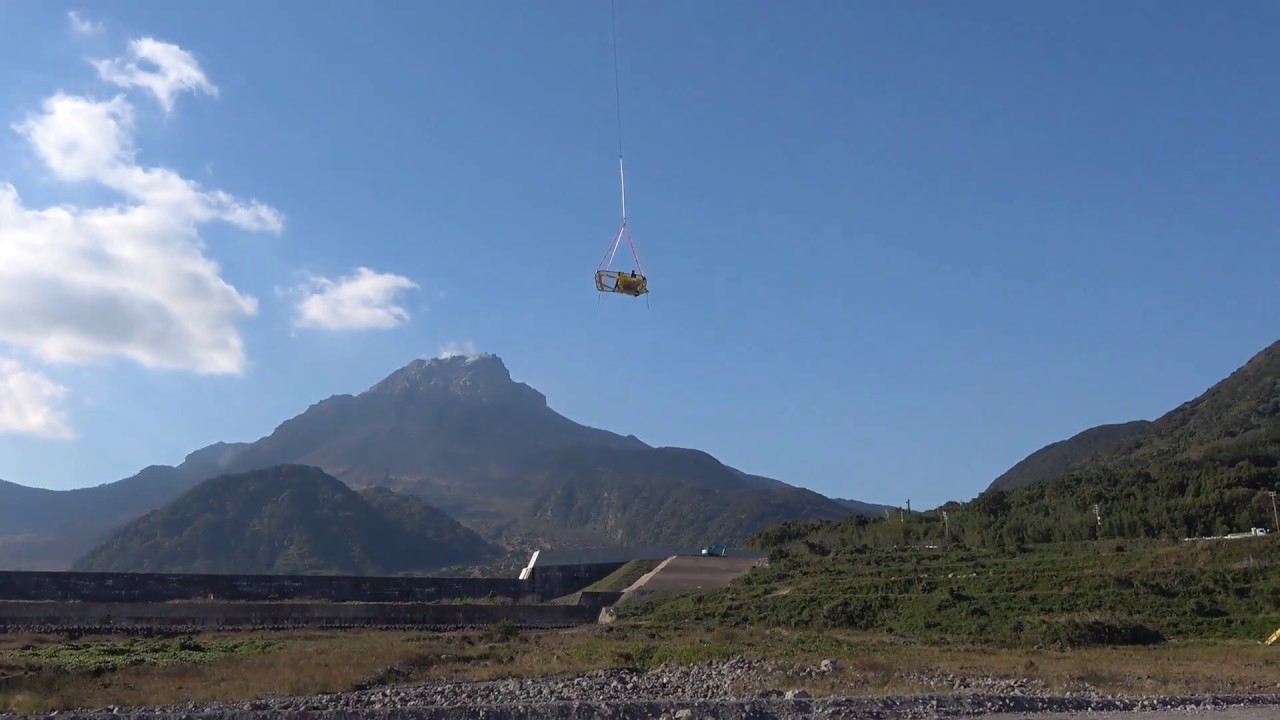 To forecast debris flow in case of a volcanic eruption, our research group made field experiments of robotic technologies in Unzen-Fugen-dake, Nov. 2016. The first experiment was a soil-sampling. The UAV and soil-sampling device returned less than 100g soil. The second experiment was a simple permeability survey with a UAV and a suspended device. It cannot act an actual permeability measurement, but a tendency of permeability can be observed by popping a water balloon. The last experiment was to retracted UGV by UAV’s capturing net. All experiments were conducted in the construction area of Unzen-Fugen-dake, and the sampling device worked in an actual restricted area. (Dec., 2016) 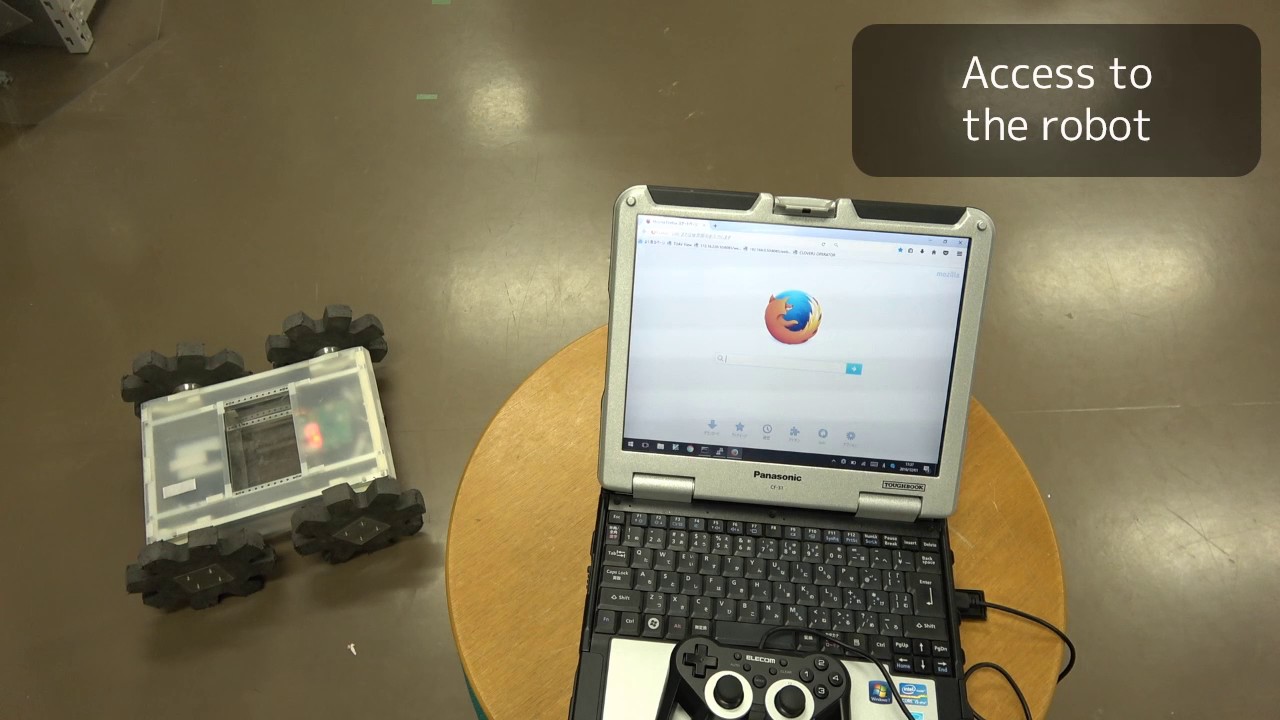 This video introduces our remote control system for the mobile robot that runs ROS. The system can work on a web browser and does not need to install dedicated software to operators PC. Also, the system either work on Android device since browser base. 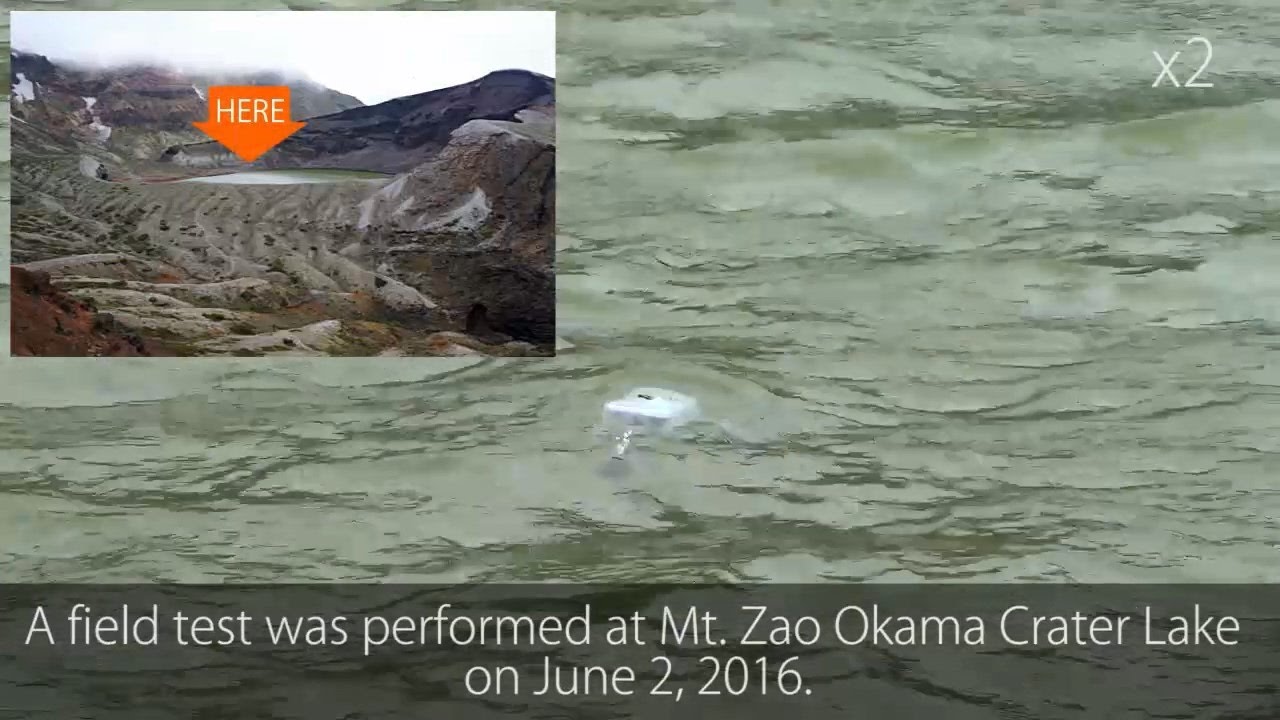 Surveillance of the crater lake is valuable for volcanic disaster prevention. However, this is dangerous work for humans.

We developed an autonomous depth mapping system to reduce the risk of surveillance. A field test was performed at Mt. Zao Okama Crater Lake on June 2, 2016. The path for the autonomous depth mapping was designed to avoid manned surveillance. The navigation through 450 meters of the path was done in 35 minutes. No upset occurs under 5 to 20 m/s of winds and blast. A maximum angle of the body swing was 0.09 rad. Lake bed depth map was successfully generated by the autonomous USV system. 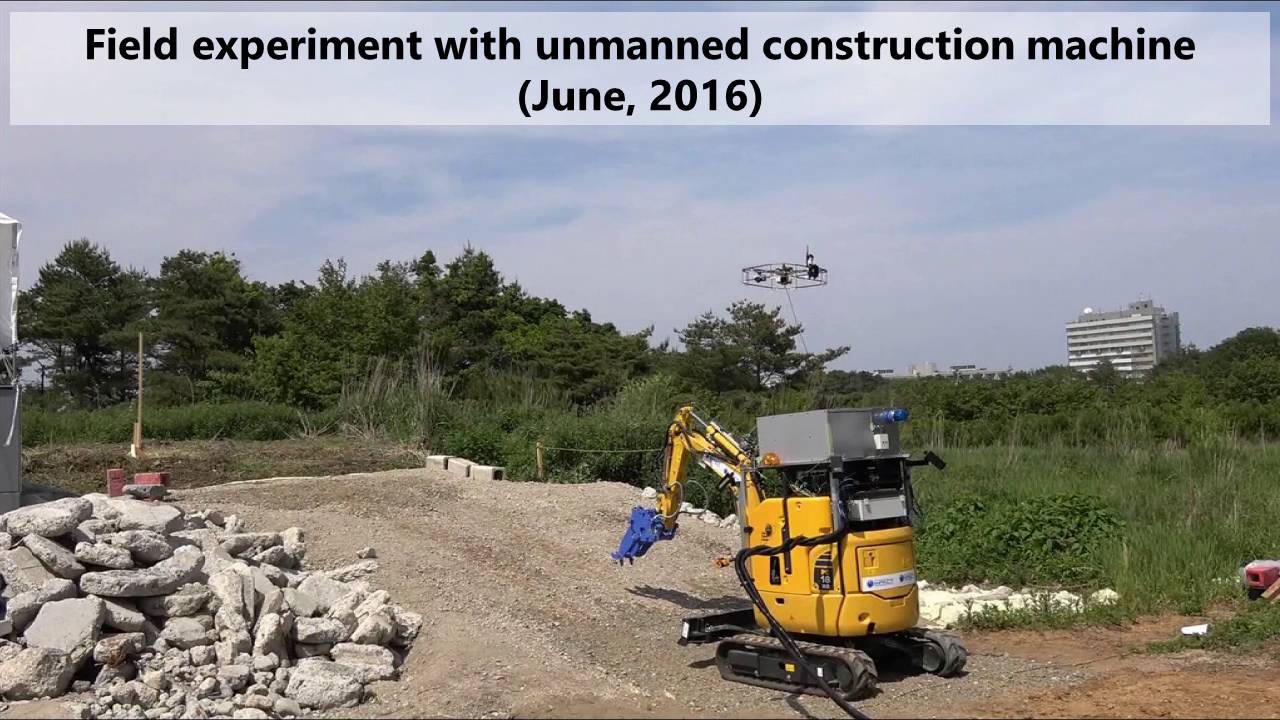 When sediment disasters occur, unmanned construction machines are useful for emergency rehabilitation from the point of view of worker’s safety. However, in case of initial response, operators feel difficulty because of a lack of visual information caused by no moving camera vehicles. In order to add a third party’s point of view, we developed a power-feeding helipad for tethered multi-rotor UAV mounting on an unmanned construction machine. The helipad controls the tension of the tether for adjustment of its feeding length. In this movie-clip, we introduce our helipad, and show an initial field test.